Our second article in a series of blog posts that we are publishing here on Peculiarities Peddler centered around how to grow and cultivate various plants and herbs as well as their uses in rituals, the magical household, and medicinal purposes. In this post, The Pagan Pantry – Rosemary, we will help you understand the properties of rosemary and how to better utilize the herb in your practices.

Rosemary, an evergreen shrub bearing highly aromatic leaves, is part of the mint family. It originated in the Mediterranean area and is widely known for its aromatic leaves. Rosemary is also used in lots of cooking recipes. Rosemary is a perennial bush (meaning that it grows for more than two years) which will grow well in full sun with regular watering. The plant flowers in the spring and summer, if the weather is humid enough. The flowers are bluish and the leaves are very spruce like that are green on the top and white underneath.

Basic Care: They Grow Up So Fast!

There are three key components to grow healthy rosemary: sunlight, drainage, and air flow. Rosemary thrives on 6 to 8 hours of full sun per day and can withstand high temperatures when watered appropriately. You will want to plant your rosemary in well draining, sandy soil and water only when the soil is completely dry. Wet feet can quickly lead to root rot, which you certainly don’t want to subject your sweet Rosemary plant to! While this hearty herb can withstand light frost in maturity, bring immature plants indoors if low temps persist.

Pruning: Snip It, Snip It Good!

You can propagate Rosemary with cuttings taken in early spring throughout summer from a non-flowering branch. Rosemary will flourish with regular pruning. You can prune it into a shape you like, or just prune it to use it in rituals or cooking. Removing the top 1 to 2 inches of branches will not only supply your pantry with fresh rosemary for cooking or use in rituals but it will also help your plant bush out. This will help keep it from going woody too quickly. Cutting into the woody portion of the shrub will halt new growth in that area, so it is important to pay attention to where you are pruning.

Drying rosemary, as with any herb, can easily be done with simple tools and supplies found in your home or at your local market. Tie 2 to 4 sprigs together with twine or cotton string and place upside down in a plain paper sack. Wrap a length of twine or string around the outside of the bag and stems to secure them, then place them in a dark, cool place for 1 to 2 weeks. Refrain from hanging your herbs to dry as sunlight will bleach the plant, leaving it far less potent. Hanging herbs to dry also attracts dust and pests, which render them useless in all applications.

Rich in antioxidants and anti-inflammatory compounds, this all-star herb can boost your immune system, improve circulation, aid digestion, prevent brain aging, and even aid in brain recovery. Rosemary can be used in to brew teas by steeping fresh leaves in hot water for 5 to 10 minutes. Alternatively, a tincture can be made by placing the leaves and flowers in an amber jar, covering with 80 proof alcohol and storing in a cool, dark place for 6 weeks. Just be sure to shake the mixture every few days! Rosemary poultices can alleviate pain in achy joints and sore muscles.

Ritual Uses: This Is Where The Magic Happens!

Often referred to as the ‘herb of remembrance,‘ rosemary is useful in rituals to enhance memory or during meditation while attempting to recall past lives. It can be burned as an incense, added to ritual baths, worn as an oil, or simply placed under ones pillow or carried in a small circle of cloth. Burning rosemary will cleanse one of energies left behind by illness. Bathing in or anointing with rosemary oil will make you more memorable to others and help to leave an enduring first impression. When placed under the pillow it is said to dispel negative energies and ward against bad dreams. Carrying rosemary can help to call forth love.

Magical Properties: Not Your Average Herb!

While rosemary is generally referred to as having masculine properties, tomes of old lend to an alternative outlook. Once associated with the Greek goddess Hebe, the goddess of youth, it is no wonder this herb is used as a memory aid to encourage a youthful mind. Its more current associations are with that of the sun, Leo, and fire. While this sun-loving shrub is obviously solar by nature, its magical uses lend more to the feminine aspects of healing, cleansing, and clarification rather than the typical attributes of other fire herbs, such as assertiveness and manifesting will.

Check out our infographic that we put together for you to utilize: 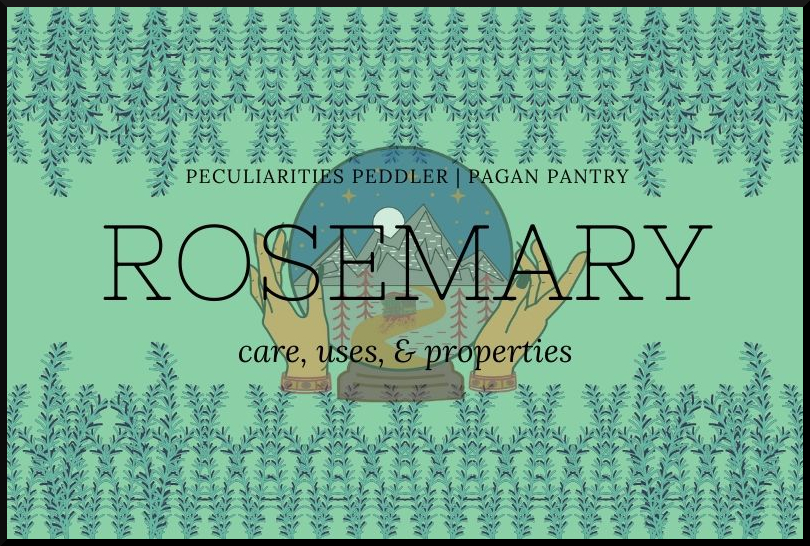 There are several folk names for rosemary: compass weed, dew of the sea, elf leaf, guardrobe, incensier, libanotis (Greek), polar plant, and/or sea dew. *Taken from p.218 of Cunningham’s Encyclopedia of Magical Herbs. Rosemary is one of the oldest incenses and can be used to cleanse your space of negative energy before performing a magical act.

The following books are referenced in this article and would be an excellent addition to your magical library:

***These are links to our Amazon affiliate page; if followed it will help us earn a small commission based on the sales and charge you nothing extra. If you want to read our full affiliate disclaimer, please click here.

This site uses Akismet to reduce spam. Learn how your comment data is processed.

Based out of the North Georgia Appalachian foothills, we create magical items imbued with our love and power to help you in your own personal journey. We appreciate your business! Stay peculiar, friends!